I was recently asked to chair an informal round-table meeting of six Chief Information Officers (CIO) with a lovely broad remit of “what does 2013 bring you?”.  The initial pleasure at being asked was tempered by the lack of fee, although to be fair there was tea and biscuits on offer!  It ended up being a really interesting two hours given a nice edge for me as I am not currently “in post” and so was able to be somewhat more detached than usual from the topic of the CIO challenge.

All of the CIOs felt that they were faced with even more conflicting demands that in previous years.  The general view being that they were expected to balance identifying and executing real innovations to drive revenues/operating profit  with a relentless imperative to continually reduce operating costs; alongside these demands they all confirmed that they were “just expected” to deliver a highly available IT service and managing the risks associated with technology, both traditional and those made more potent by the consumerisation of corporate IT. Blimey, but no real surprises.

Of course we could not avoid talking about cloud computing or how they were all frustrated to some degree or another with the lack of benefit they felt the out sourcing vendors were delivering.  On the last point I could not resist making some challenging points about CIOs being unclear about their objectives from out sourcing contracts and how many contracts ended up being adversarial l in structure thanks to misguided and unsophisticated thinking during the procurement process.  We ended up agreeing (more or less!) that it was possible to derive substantial benefit from out sourcing and that cloud computing representing a golden opportunity to address some legacy issues with the model.

The topic on which we spent the most time was related to funding and how their company’s were managing the investment process.  It was a common view in the room that we are witnessing the move of “shadow IT” into “legitimised business driven agility”.  It seems that for many the budget for line of business IT now lies outside of the CIO’s hands, in some cases without their having any approval role in the adoption process.  Indeed one somewhat downcast CIO confessed that they were effectively restricted to the “shared essential IT infrastructure” on which business operating units decide what to operate.  There clearly has to be a balanced between “enabling the business” and “exposing the business” as all had examples of where IT spend had taken place outside of their approval and had proved an expensive mistake.  That said when pressed a number did admit that there were equally examples where the line of business solution adopted had proved a huge mistake.  All felt exposed in terms of data integrity and system integration as a result of the new order. 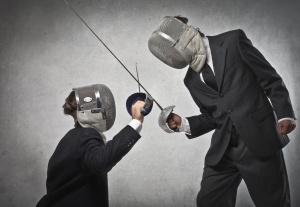 It is clearly a trend worthy of more thought and will require adjustments to the corporate operating model to optimise the value gained.  In the same general area Gartner recently issued a report talking about how the Chief Marketing Officer (CMO) in many corporate is taking over areas previously held by the CIO, particularly in companies where the line between marketing and the digital world has disappeared.

They predicated that by 2017 the CMO will be spending more on IT than the CIO.  The Gartner report is behind a pay-wall but you can find an article by Forbes has a good summary of the key points here.  The importance of digital marketing in many business sectors means that the CMO and CIO need to be become the best of friends.  Indeed I read one blog post recently that was speculating on when we would see the first CIMO, Chief Information & Marketing Officer; not a title I have yet seen but I have seen Chief Digital Officer!  Gartner sum up the challenge rather well I think with:  “CIOs face a future torn between current operations and digital opportunities. The CIO agenda for 2013 involves adopting new approaches to hunting for innovations and opportunities that deliver digital value, while harvesting greater business performance from products, services and operations.”

I was impressed that all those in the room had recognised the situation and were clearly taking action to mitigate the risks for their company and find a collaborative way forwards.  Some were clearly better placed within their organisation that others to succeed.  I plan to return to this topic in the future but in the meantime a few days after the event  I read an excellent article on CIO.COM by Bernard Golden entitled  As CMOs Grab IT Budget From CIOs, Cloud CapEx and OpEx Shift.  It is well worth a read and covers the topic in a good level of reasoned detail.  The output from the event is restricted to those attending but at some point I think it will become public domain and I will add to this post.

Finally to answer what some might feel is the most critical question on the event – the biscuits on offer were a mix of shortbread and custard creams.

3 thoughts on “CIO angst over tea and biscuits”